“Piece Out”, Piece In, focuses on the causes, consequences and alternatives of/to gun violence. The mural team began the summer with presentations from community activists, elected officials, anti-gun advocates and family members of gun violence victims. They shared a wealth of information and experiences that shaped the design teams thinking about the issue. The team also investigated the history and current state of gun use, laws, and legislation and the current levels of gun violence in the United States and locally. They discussed and focused on a series of major issues which were divided into 3 categories: causes, consequences, and solutions/alternatives. The team felt it important to trace the history of gun violence in the US to find a reason for the current level of gun obsession and violence. The first part of the mural, which unfolds in a narrative from left to right, addresses the history of guns in the US. The design flows into imagery showing how the current laws and regulations lead to death by guns in urban communities. The final aspect of the mural displays the power of strong communities and supports for youth in preventing gun violence. 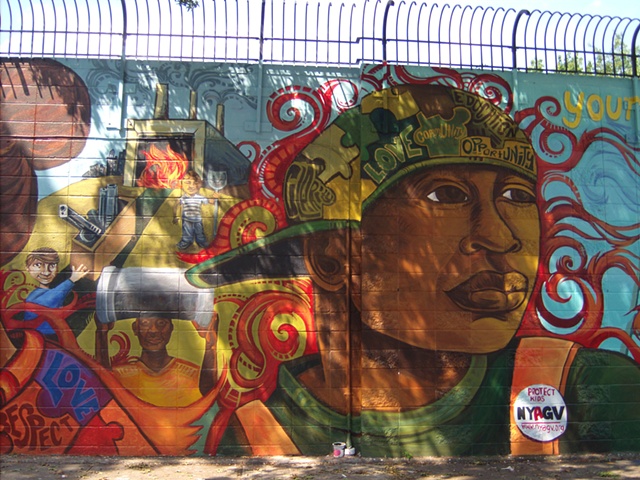